I hope you have enjoyed the Kid’s Crafts I’ve been sharing this summer. My kids have enjoyed making them and it helped to keep them busy during the summer. There is only a couple of weeks until the summer will be over and so will our summer kid’s crafts series. 🙁 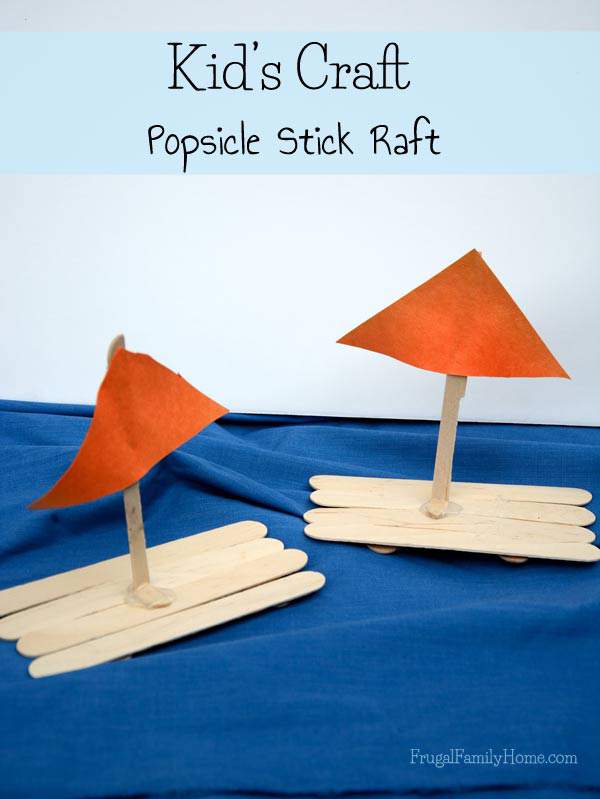 This week we made a couple popsicle stick rafts. They were really easy to make. For this craft you will need a few popsicle sticks and a construction paper triangle. We used hot glue to stick ours together and it held up well, when we sailed them.

Whatever glue you decide to use, be sure it can hold up to being in the water. It would be terrible to have your raft fall apart because of faulty glue. 🙁 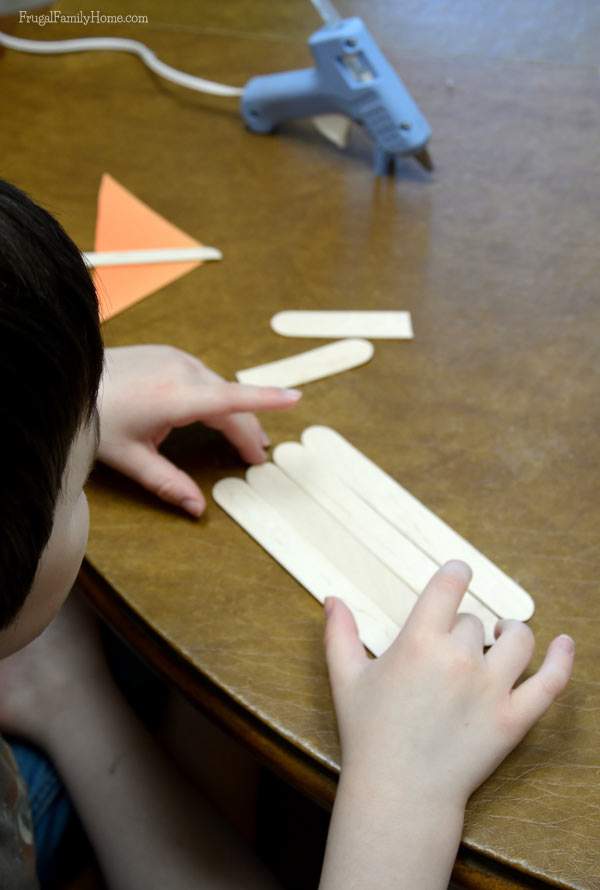 We started by cutting one of the popsicle sticks in half to hold the main sticks in the raft together. I thought about trying to tie them together. But after considering it, I decided it would be easier for my kids to use the glue.

We lined up four popsicle sticks in a row and then added a bead of hot glue on one end. While the glue is still warm we placed one of the popsicle stick that was cut in half on top and pressed down to secure it. Do the same for the other end.

This is when I learned the hot glue will squeeze out between the main 4 popsicle sticks and stick to the surface under them. So be sure to have a piece of paper, newspaper or a hard surface that isn’t damaged by hot glue under them. My heat-resistant table cover held up all right, but I would have used some other surface if I had thought ahead. 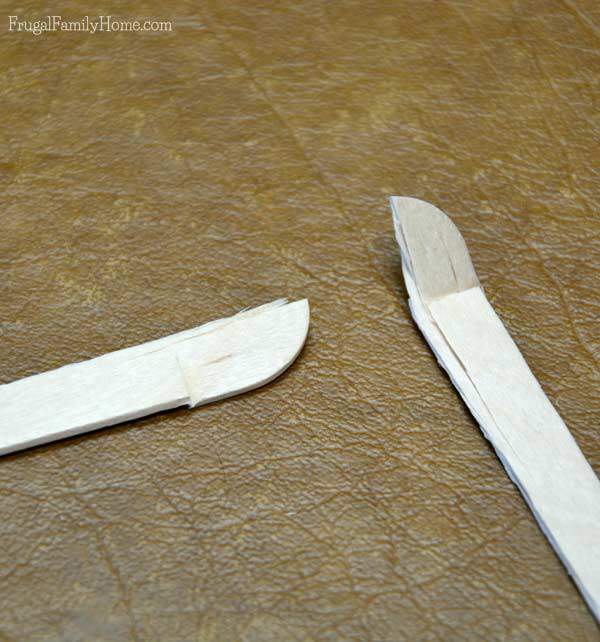 We cut the remaining popsicle stick in half lengthwise to make it skinny for a mast. To attach the mast to the raft, we cut a small slit on one end, not all the way through, so we could bend the end of the stick for a base. 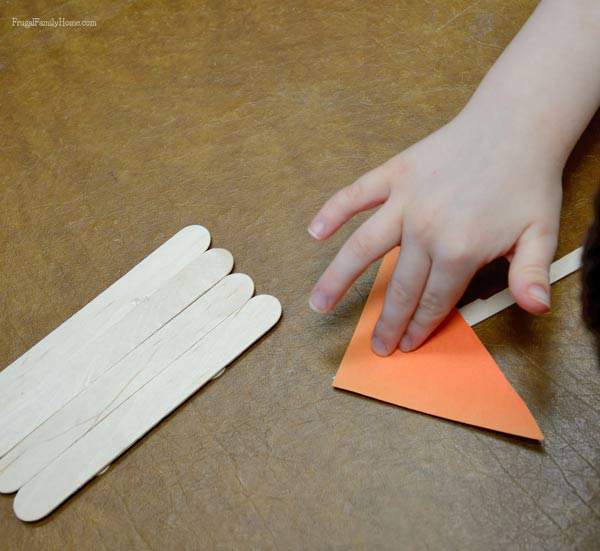 Before gluing the mast to the raft we glued our construction paper triangle to the upper portion or the mast. The end opposite of the bent end. 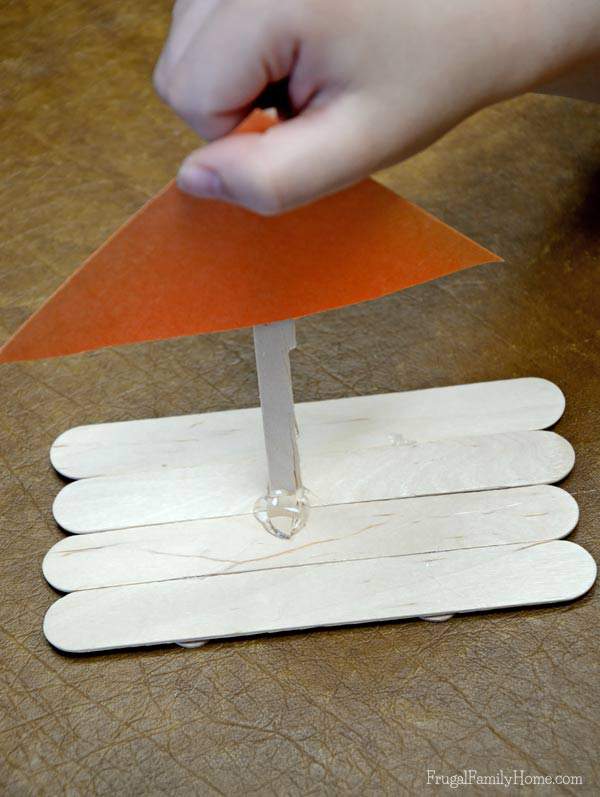 To attached the completed mast to the raft, we added a generous glob of hot glue to the right side of the raft. Then stuck the bent end of the mast, in the glue and held it in place until the glue set up. Once the glue was set it seemed to be very secure. 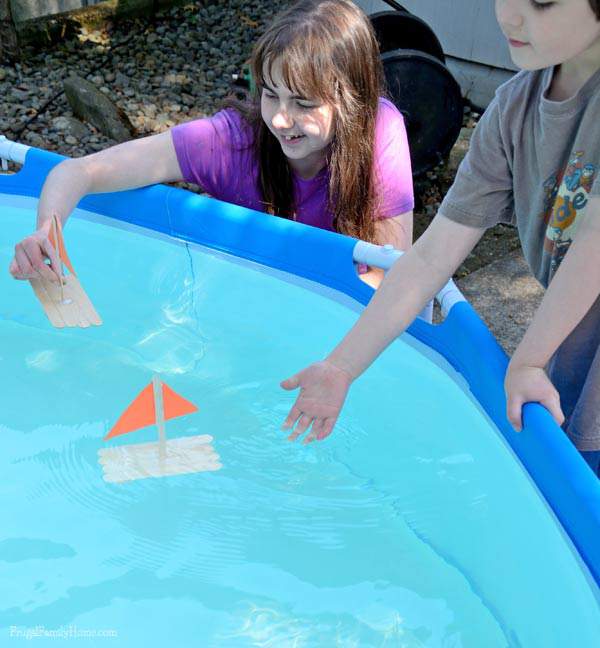 We took our rafts out to the pool to set sail. The rafts did really well, until my son knocked his over and the sail got wet. Once the sail was wet, it kept tipping over and sinking. So maybe construction paper wasn’t the best plan for our sails. 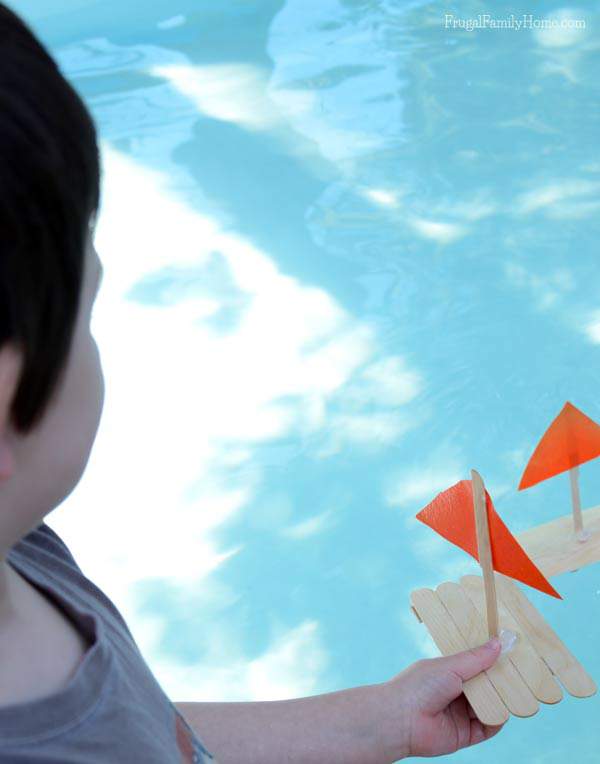 Next time, I think it would be better to cut a sail out of a plastic lid or jug. It would hold up better to the water.

Have your kids every made a raft or boat? How did you construct them?