Want to get started with knitting cables? This knitted cable hat pattern is the perfect one to try. I love how easy the cable pattern was to make once I got my gauge right. 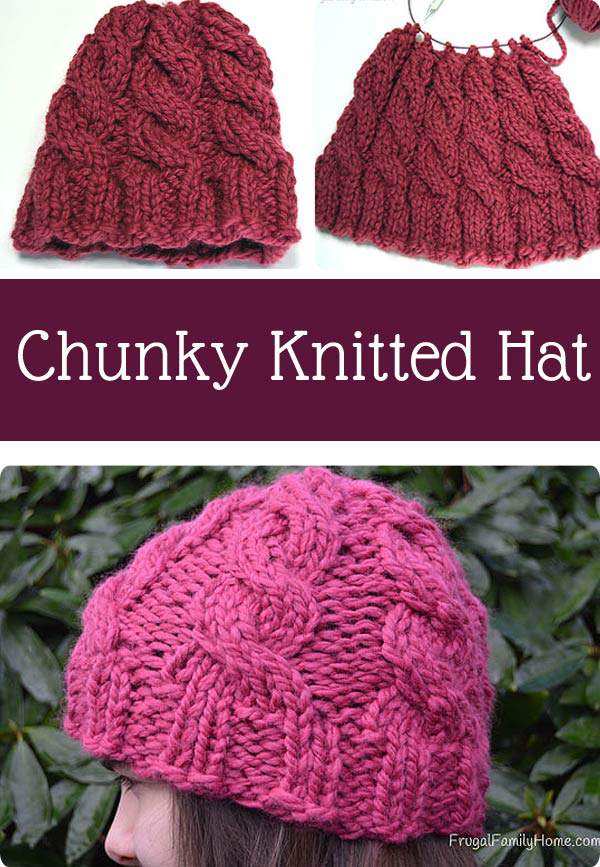 I really should start projects like this in the summer and not in the middle or end of winter. I really should be working on some summer projects now so they are ready when the season is here. But I saw this pattern for a Cable Knit Hat and wanted to give it a try. I know we have enough rainy weather ahead that this hat will get some use before summer gets here. 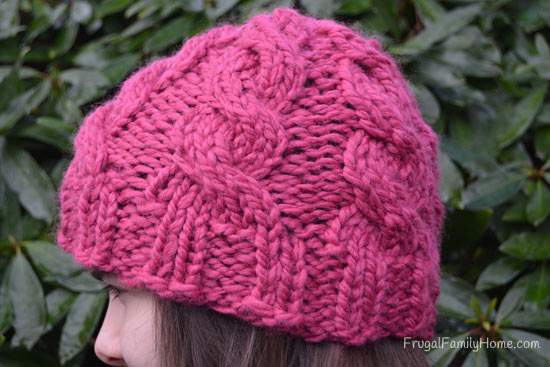 When I printed off the pattern I mistakenly thought it was a faux cable knit pattern. You see I had never tried to knit cables before. I had only done cables with a faux cable pattern, which technically isn’t a cable at all, but looks like one. It wasn’t until I was already into the pattern that I realized my mistake.

Lucky for me I had already bought a set of cable needles a while back. I must have known eventually I would need them. So I decided to take the plunge and just give it a try.

I was really surprised at how easy it is to knit cables. Well, at least the cables in this hat pattern are easy. I’m glad they were easy too since I had to restart the pattern 3 times. Well, four if you count the extra time I had to restart the cast on, since I didn’t allow enough yarn to cast on all the stitches.

Yes, you read that correctly 4 times, I had to restart. At first I thought the bulky yarn I purchased from Knit Picks was going to work. But the gauge was way off. I purchased some Lion Brand Wool Ease yarn as the pattern called for and started again. 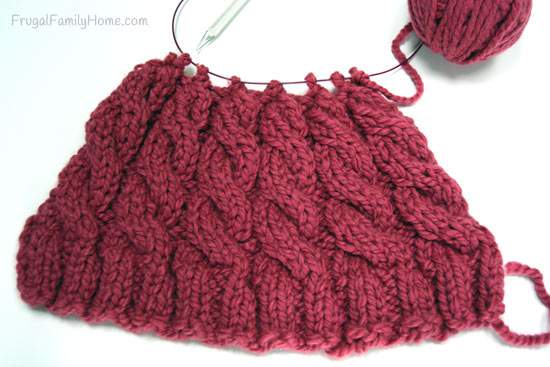 I used the knitting needle size the pattern called for, size 13,  thinking because I usually knit loose they might make the hat a little big but I knew it would be fine. To my surprise the size 13 needles made the gauge too small. So again I took it out and found my size 15 needles.

Once I got enough of the pattern knitted to check the gauge again, my gauge was still a little small. I didn’t have any bigger knitting needles so I thought I would just chance it at this point. After all the gauge was really close.

All of that to say if you use the pattern I linked to and if you knit tightly you might need a much bigger set of knitting needles. 🙂

Once I was underway with the pattern for the third time, it went really quite quickly. I think by this final time, I was so familiar to the pattern, it only took me a couple of hours to complete the hat. I love the instant gratification of getting  a project completed so quickly. 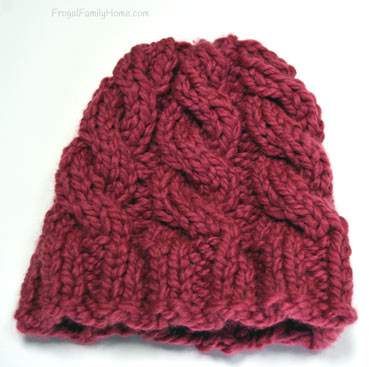 The hat fits really nice, not too snug at all. I also love the feel of the yarn, so nice and soft. The cables give the hat a nice texture too. If you haven’t tried cables before, this would be a perfect pattern to start with, because it’s not too complicated and it a quick one too.

What craft projects have you been working on lately?

Just so you know, some of the links in this post are my referral links. When you use them I can make a little money at no extra cost to you. For more information please see my disclosure policy.