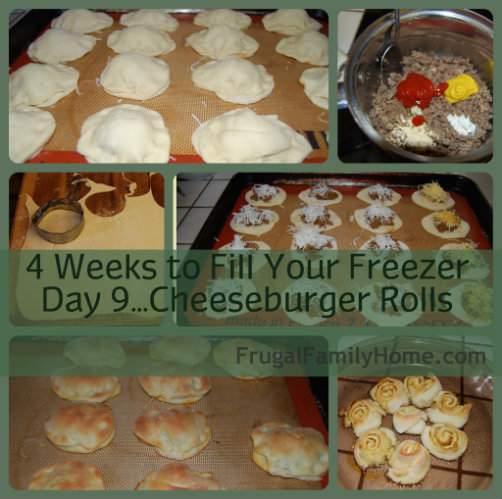 For today’s freezing cooking I am making one of my son’s favorites, Cheeseburger Rolls. Crystal at Money Saving Mom is making Ham and Cheese Pockets. But since I could not find any inexpensive ham at the store I decided to make the cheeseburger rolls.

I don’t follow the recipe exactly when I make these. So I will include the changes I make as I go along.

I made a double batch of the 90 minute rolls. I then rolled them out and cut them with my biscuit cutter. 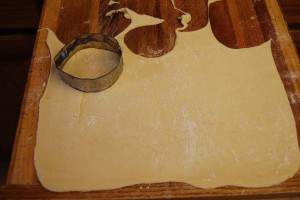 I made 16 bottoms and placed them on the cookie sheet. The original recipe calls for only making 6 but I make 16 out of each batch of rolls. I roll the dough out thin because the dough does expand as it bakes and get thicker. The first time I made these I rolled them out too thick and they were huge. 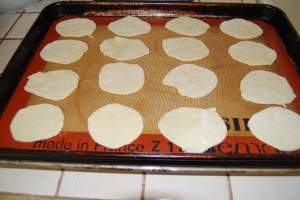 To make the filling

I browned 1 1/2 pounds of hamburger. The recipe calls for 1/4 pound for each 6 rolls. Since I was making a double batch and more than just the six rolls the recipe calls for, I increased the filling. I added in garlic powder and onion powder to the hamburger once I had drained off the fat. Then I added about 4-5 tablespoons of ketchup and 2 tablespoons of mustard. We like the flavor it gives to the filling. In the picture below I did not put in enough ketchup the first time so I had to add more. 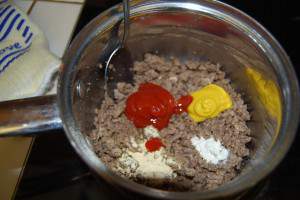 I placed a tablespoon or two on top of each of the bottom dough circles. Then I add some cheese on each of them. Some of these I used the goat cheddar and some I used regular cheddar. 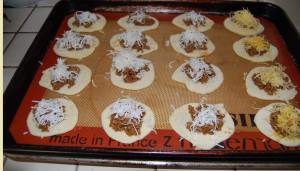 Then I rolled out 16 more dough circles to go on top. The top dough circles I roll out just a little thicker so I can stretch them over the filling without the dough tearing. Then I just press the edges all the way around to seal the filling in. 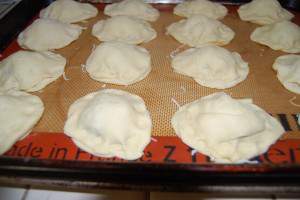 I bake them in a 350 degree oven for 10-15 minutes or until browned. We had a few for lunch today as my son really wanted some. 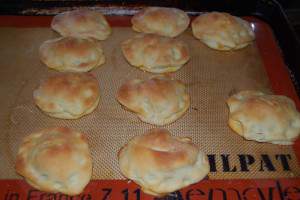 I let them cool on a wire rack until fully cooled. Then I put them into a freezer bag, sealed them up and labeled the bag. I ended up making 32 cheeseburger rolls. 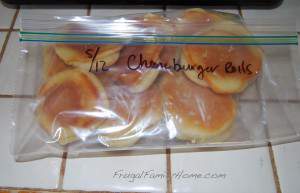 I even made some dessert

There was a small amount of dough left over after all the dough circles were made. We couldn’t let it go to waste so I rolled it out. Spread some butter on it and sprinkled it with brown sugar and cinnamon. I baked them up and we had these tiny cinnamon rolls for dessert. 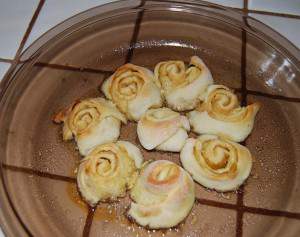 That is all the freezer cooking for this week. On Monday I will be following Crystal’s plan at Money Saving Mom by making Southwest Roll Ups. I have not made these before so I am looking forward to trying them.

Do you have a favorite freezer cooking recipe?