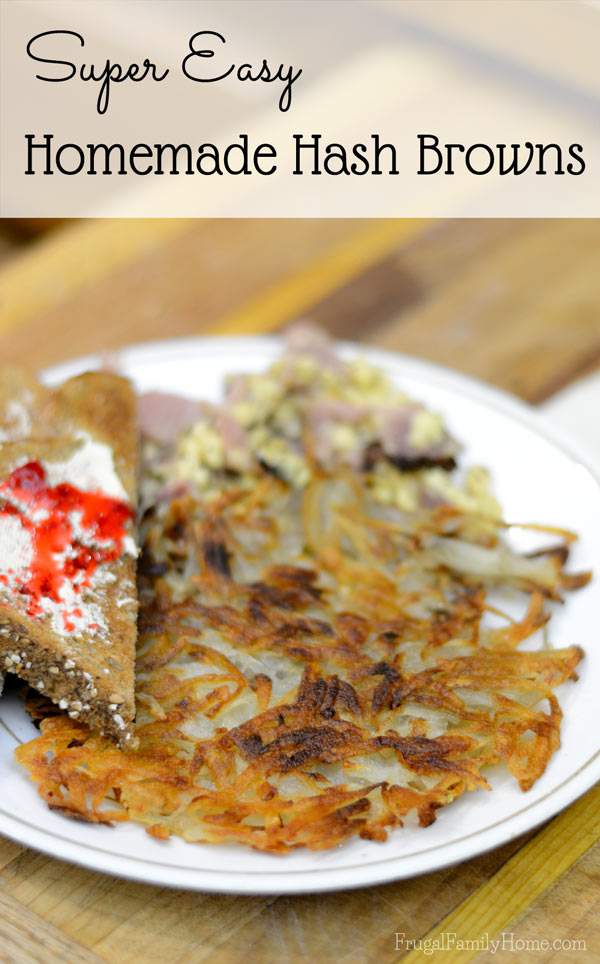 My family loves hash browns to go with breakfast or with a breakfast dinner. For a long time the only way we ate hash browns was from the freezer section of the store. But one day I looked at the ingredients.

Which were basically potatoes and some kind of fat. There was also some additives too. After seeing the ingredients I thought how hard could it be to make them on my own. You might be thinking the same thing too. So here’s how to make hash browns from scratch at home.

I know my grandma used to make fried potatoes. Her fried potatoes were the best. She would slice the potatoes thin and then lay them in a single layer in her electric skillet and let them cook to perfection with a little oil in the bottom of the pan.

With my grandma’s technique in mind for her fried potatoes, I set out to make my own hash browns a few years ago. Little did I know just how easy this would be and how much money it would save me.

Preparing to Cook the Potatoes 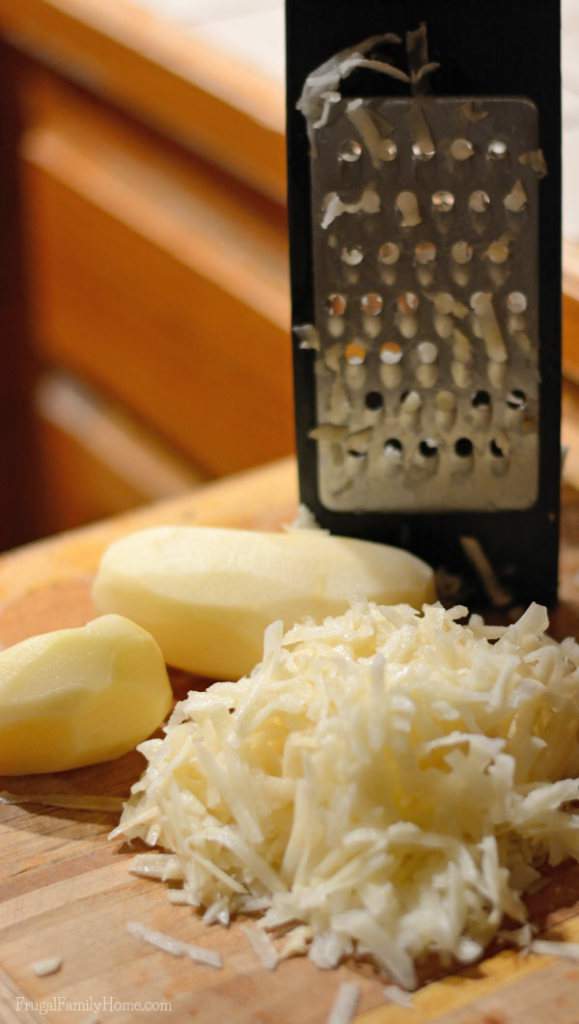 You’ll want to wash and peel your potatoes. I use one potato per person as a guide to how many potatoes to peel.

Before you start to grate the potatoes put some oil in the bottom of a skillet or an electric skillet and turn it up to medium to medium high. You want the oil warm before you add the potatoes.

Grate the potatoes with the course side of the grater. If you have a food processor, you can use it to save some time too. If this process takes a little while, the potatoes will start to brown a little. That’s all right.

Add the potatoes to the hot pan

Add the potatoes in a thin layer to the skillet that is now warm and has oil in the bottom. Sprinkle the top of the potatoes with a little salt and pepper to taste and then let them cook. 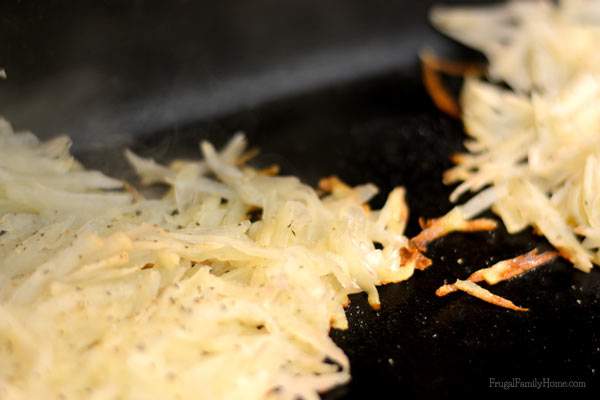 When I say let them cook, I mean leave them alone and don’t touch them until you start to see them browning good on the edges. Once they look like they are browned well. Use a spatula and flip them over.

Once Browned Well, Give Them a Flip 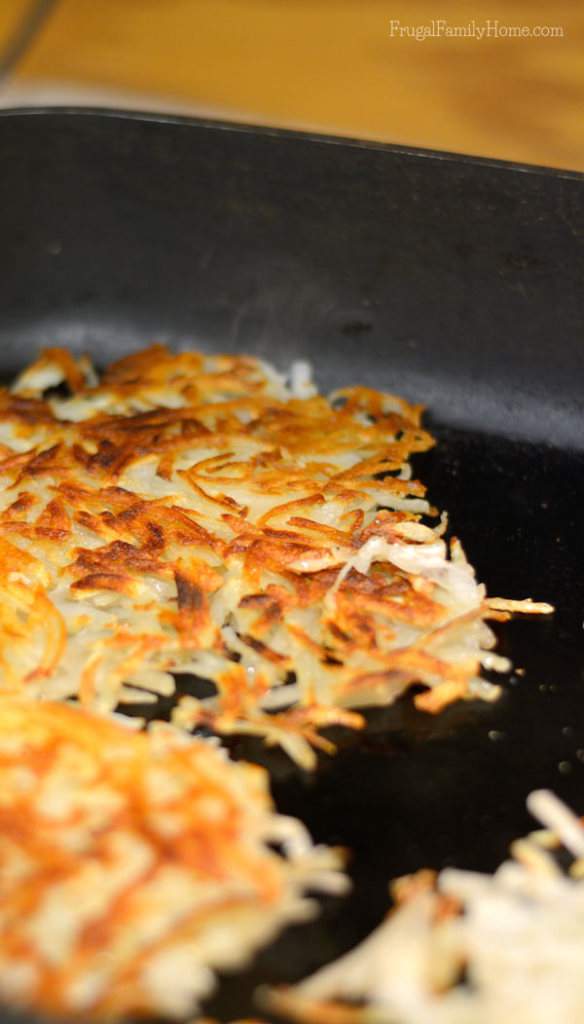 Flipping can be the hard part if you have a huge electric skillet like mine. But do the best you can. Another option to having to flip a large amount of hash browns at once is to make them into little think piles of potatoes, when you add them to the pan. Then they are as easy to flip as flipping a pancake.

At this point, if the potatoes have absorbed most of the oil you might need to add a little bit more. I usually don’t add more oil. I just know the second side won’t be quite as crispy as the first. That’s alright with us. Cook on the second side, without bothering them, until browned. 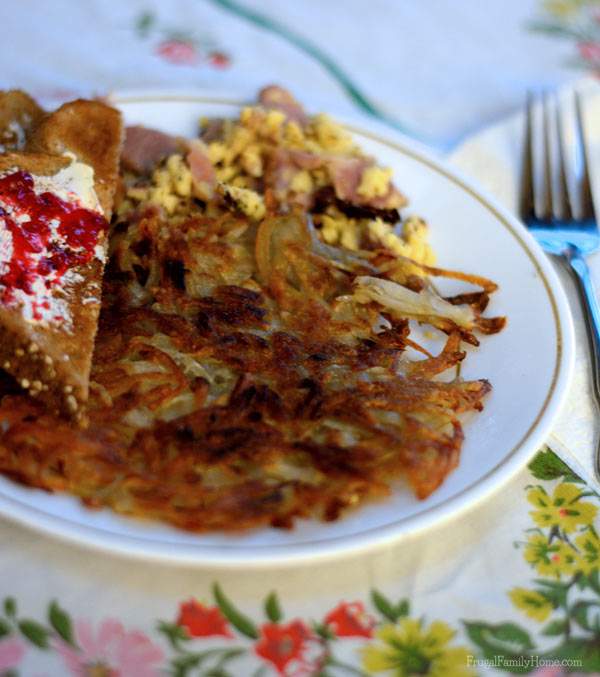 Serve them hot out of the skillet and enjoy!

Save Money and Cut the Additives

I mentioned at the beginning that this saves me money. Hash browns in the freezer section are about $1.50 a bag. I don’t know exactly how many potatoes are in that bag, but I’m thinking about 6-8 at the most. I can easily get 10 pounds of potatoes, with around 20 potatoes or more in a bag, for around $2. Around double the amount I would in a bag of hash browns, for just $.50 difference. Plus, I save freezer room for more expensive items, like meat that I find on sale.

I also get to choose the kind of oil that is added to the potatoes, opting for coconut oil or olive oil, if I want. I don’t have to worry about any additives either in my homemade version. I can use homegrown or organic potatoes too.

What ready made item do you make at home now instead of purchasing it at the store? Did you find it easy to replace this item with a homemade one?