I make candy each year and usually when I make that candy most of it my kids and husband can’t eat because it contains dairy products. Most items that I need to use in my baking and cooking I  have been able to find good substitutes for but there were a few ingredients I needed to make candy that I just didn’t have a good substitute. One of these was evaporated milk. So I decided to give a Pinterest a look for some alternatives.

I was pleasantly surprised to find a recipe to give a try and that is just what I did. I need evaporated milk to use in the two fudge recipes I make. I have in the past used evaporated goats milk but it is so expensive I was glad to try something else. 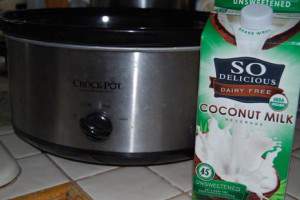 To make the diary free evaporated milk you only need a few things, a crock pot, unsweetened So Delicious Coconut Milk and time.

I needed quite a bit of evaporated milk so I used the whole half-gallon in my 7 qt crock pot. If you are making a smaller amount then be sure to use a smaller crock pot. 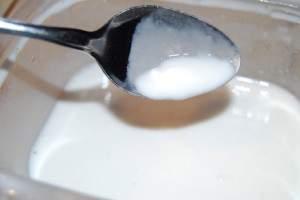 This was so easy to make and when I used it in my fudge recipe and it turned out wonderfully. Now the recipe I found said they had only tried it with coconut milk but I am thinking I may give this a try a different type of dairy free milk next time.

For a quart of evaporated milk it cost me $2.99 which is so much better than the $3.49 a 12 oz can or more for the evaporated goats milk that I used to buy. So not only do I have a new substitute but I also ended up saving some money too, which always makes me happy.

Have you tried a new recipe or idea off Pinterest lately? How did it turn out?