I love to make candy this time of year. I used to help my mom make candy when I was a kid. Each year we would make the candy and then we would go and deliver them to our neighbors, friends, and family. It was so much fun each year.

I normally would just make the same candy each year to give away. But this year I decided to try to make a couple new recipes. That’s how this recipe was born.

I used my chocolate fudge recipe as a guide. Since it’s such a great recipe and turns out so good each time. I changed it just a little and came up with this yummy Vanilla Mint Fudge, that I think is to die for.

At first, I thought, I would put a few drops of the mint candy flavoring into the fudge. Making basically a mint fudge. But then I got the idea to make a vanilla fudge infused with little chunks of candy cane, making a burst of mint flavor and crunch from a mint topping.

The resulting fudge has a nice crunch of mint and followed by a nice mellow vanilla mint flavoring. Couple that with the melt in your mouth texture of the fudge and you are pretty close to fudge heaven.

I used candy canes to crush the mint candy topping. My meat tenderizer worked well to crush them right in the wrappers. But if you don’t have candy canes you can use peppermint candies too. I find they are a little bit harder to break up though.

If you don’t have a candy thermometer check out the video below. I found it on YouTube. You can check the stage of the sugar mixture with just a bowl of cold water.

Once you have the sugar mixture to the right temperature, it’s just a matter of stirring in the other ingredients well and then spreading them into a buttered pan. Then quickly press in the crushed candy canes. You don’t have to press hard, just enough to adhere them to the surface of the fudge. 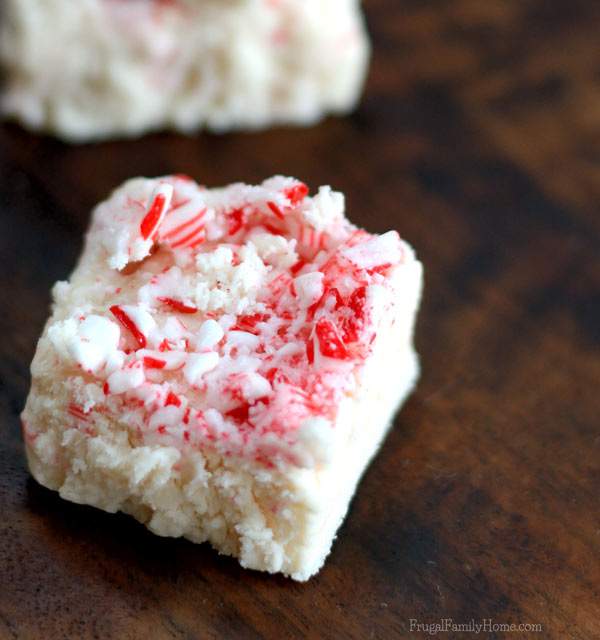 Shelly
A creamy vanilla fudge with a topping of peppermint candy. It's adds a nice crunch to this melt in your mouth fudge recipe.
5 from 1 vote
Print Recipe SaveSaved! Pin Recipe
Calories 66 kcal

Calories: 66kcal
Tried this recipe?Click here to tell us how it was!

This recipe is quick to make it only takes about 30 minutes. It makes a great last minute gift too.