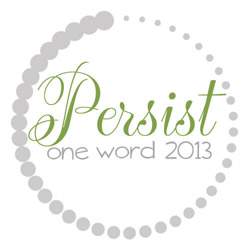 Update on my One Word for this year, Persist

I have been amazed at how I have been challenged to really persist and keep going on so many projects since I picked this word. My one word for the year is Persist, I knew with my goal of losing weight this year I would definitely need to be persistent to reach my goal. But what I didn’t expect is by keeping my word, persist, in front of me each day it would help in so many other avenues of my life.

I guess I just never realized at the time, that on certain tasks I will give up quickly, almost too quickly. Such as trying to lose weight. I would work very hard for a month or so then I would have a day of overeating or a week and just throw in the towel. But since I picked persist as my word I haven’t allowed myself to give up. Although my eating has not been all that good this month and my exercising has been fair, I have not once felt like giving up. But I have greeted each new day with a new chance to succeed. Which is a big difference in my attitude.

I also noticed in my quest to declutter my home I breezed through the living room and I have been able to maintain that decluttered state. But then when I started the kitchen, the fear of it being an overwhelming task almost stopped me in my tracks. To tell you the truth if I hadn’t been blogging about decluttering I would not have even proceeded with the kitchen at all. But I persisted through the notion that the kitchen decluttering was going to be awful and guess what? The kitchen has not been nearly as bad as I imagined.

So already this year my attitude has really changed from just one word, Persist. Did you pick a word for this year? If you haven’t it is not too late to start just pick your word and see what change it can have over you.

If you picked a word for the year how have you see it affect you so far? 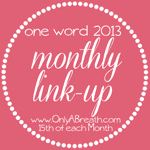 1 thought on “One Word for the Year…Persist {Update}”