How to rebuild or make a new raised beds. Even with the plants growing. It’s best to rebuild before you plant but it can be done with plants in too.

Want to get started gardening, but the soil conditions at your house just aren’t ideal? That is exactly what we faced at our home. The soil is so clay-like it almost smothers the roots of the poor plants.

When we decided to have a garden, we knew we would be building raised garden beds. We built our own beds with lumber and screws and were happy gardeners. 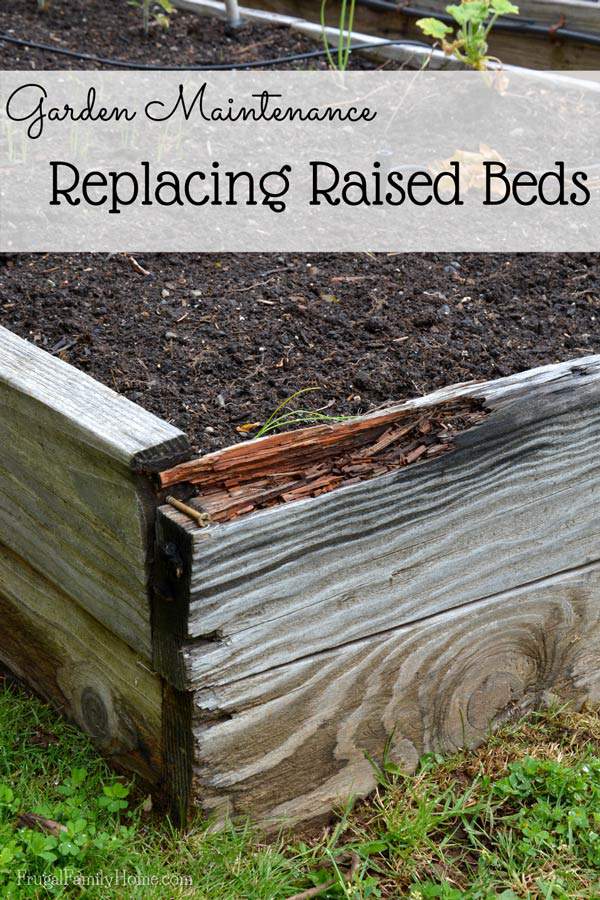 Fast forward many years later and our raised beds were looking pretty bad. The wood was rotting right off around the screws and we knew, really soon, they would just fall apart. We knew the raised beds needed to be replaced, but it was already late in the season last year. So I just went ahead and planted our garden.

We knew the raised beds needed to be replaced, but it was already late in the season. So I just went ahead and planted our garden.

But my husband and our neighbor, gotta love helpful neighbors, found a good deal on cedar boards for our garden beds. Our neighbor picked up the wood on his way home from work, we have great neighbors, and we now had the wood to rebuild the beds, but we also had plants growing. 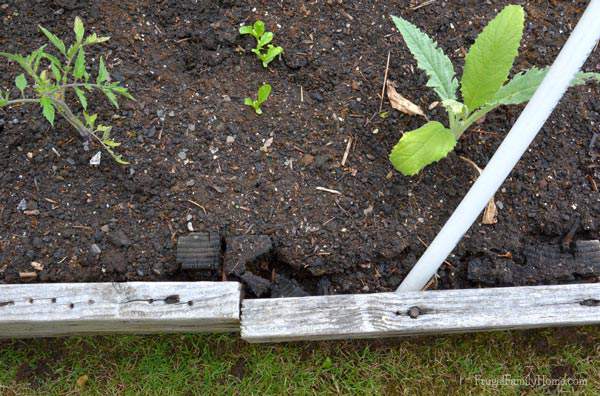 The wood on the old beds was so rotten, we thought surely we could get them off and rebuild them with the plants in place. So we set out to tackle this project.

In case you need to rebuild your raised beds, I thought I would share what worked for us. Even if you have to do the rebuilding with the plants in place, you’ll know how. Although, I hope I’m sharing this early enough, that you can get them rebuilt and then plant your garden.

How to Rebuild Raised Garden Beds

The first thing I did was water really well. It was hot the few days we were working on this project, another reason to get to this early, avoid the hot sun. I really overwatered a few days before we started.

Having the soil nice and moist helped to hold the soil together as we removed the old boards. 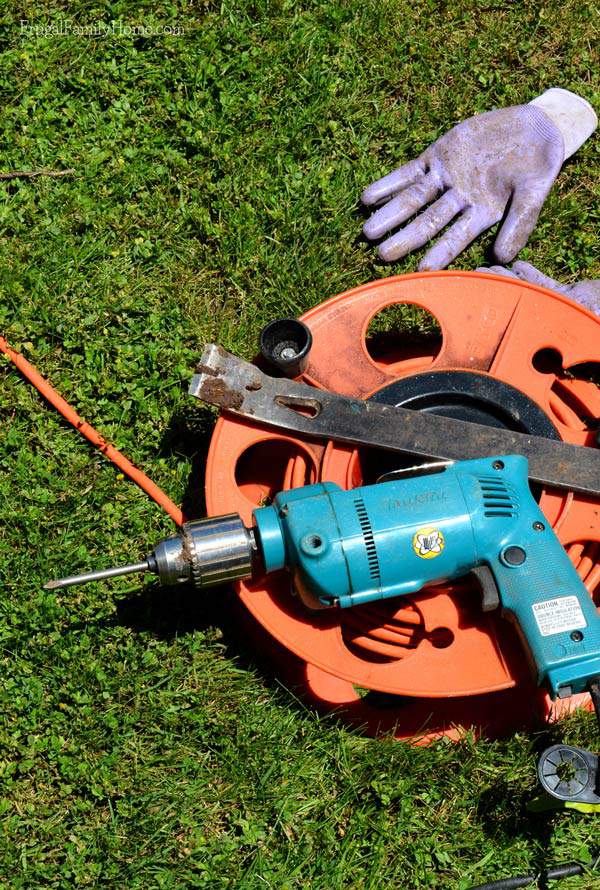 Removing the old garden bed boards wasn’t too hard. I only needed to use a drill to remove the screws, a pry-bar for those difficult to remove boards, and a pair of gloves. Yes, this job was pretty dirty, so be sure to wear gloves.

After removing the screws at the end of the boards, I carefully pried the board away from the soil. In most cases the boards were rotted enough they just kinda fell apart, as I pulled them away.

The soil was moist enough that it held together nicely. We tried not to touch the soil until the new boards were in place. 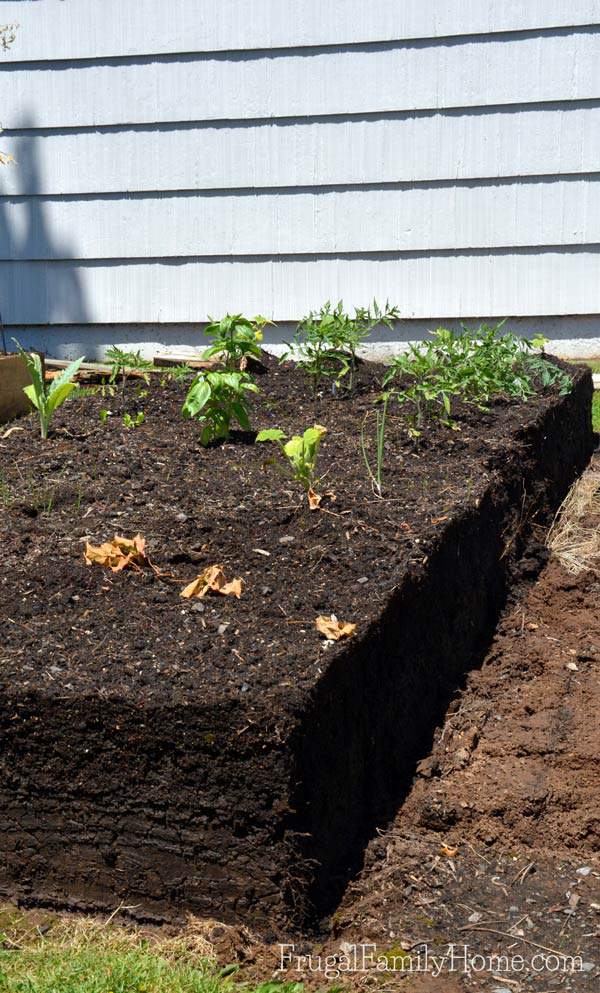 We opted to go with full length and height boards this time. We used one huge board running the full length of the bed. We also purchased 12 inch, wide boards. We didn’t want to have to screw two boards together to get the right depth this time.

Since that is where our beds started to fail first, even though we reinforced them. 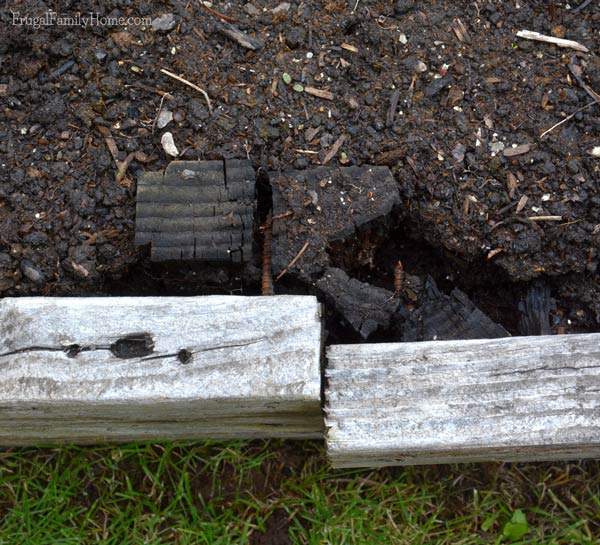 After the old boards were removed, it was time to level the boards on each side of the garden. Our garden plot is on a slight downward slant. Well actually it slants two ways, so we dug down into the dirt to get the boards level.

We didn’t bother with this step the last time we built the beds, but we had some pooling in the garden beds. This time we took the time to level them out.

We leveled them not only with the ground but with the bed next to them. This was quite a task. I felt we really didn’t need to do this leveling. But I’m glad we took the time to level them, they do look quite nice and no pooling of water, in the garden. 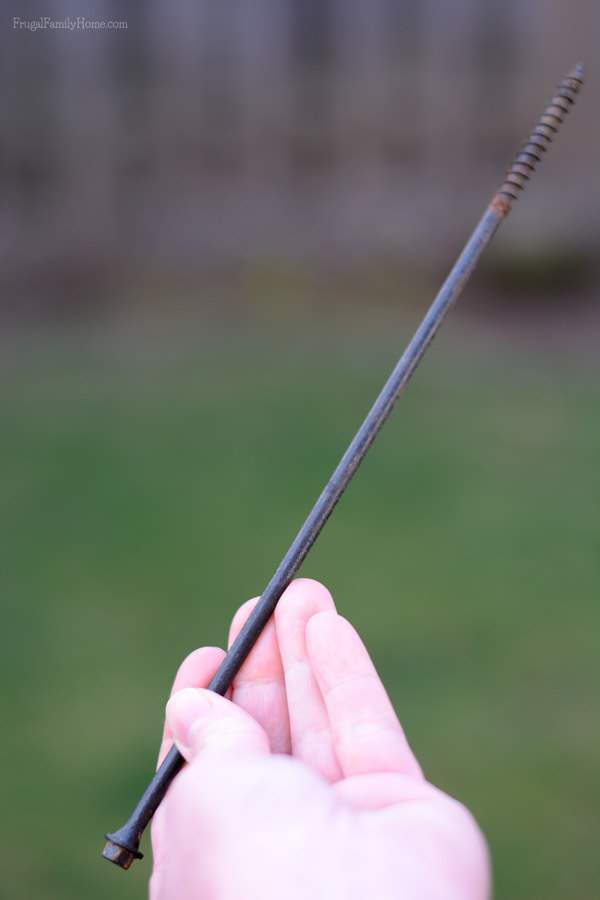 After the boards were level, we used huge screws (affiliate link) to attach the boards at the ends of the beds. We reused these screws from the old beds. The screws were really quite expensive and it took some work to remove them from the old boards, but it was well worth it.

I think those screws when we purchased them 6-7 years ago, were $50 a box and we needed two boxes at the time. They cost as much as the wood. But they have lasted quite well, so they were worth the cost.

Attaching the End Boards to the Raised Garden Beds 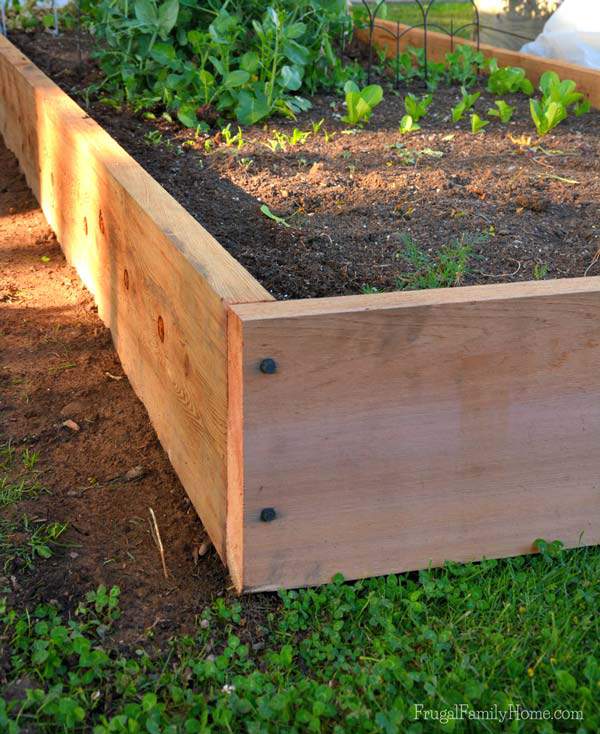 Be sure to be in the middle of the long board end, when you start and try to keep the screw as straight as you can when screwing it in. We had to go really slow to keep it straight, but it was worth the extra effort. We didn’t have even one screw come out the side.

Once the new beds were in place, I needed to move a few plants that were right on the edge. We needed to add a little fill dirt, here and there, but that was it. The garden beds were now rebuilt and we didn’t lose any plants. 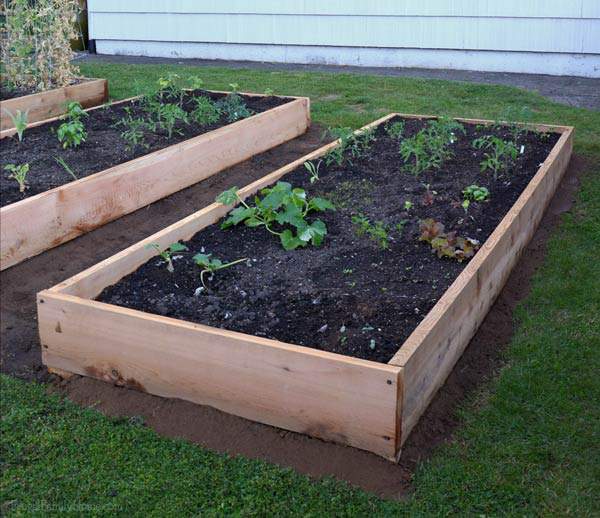 ✳︎ Before removing  the boards, water the beds well. It helps to hold the soil in place.

✳︎ Remove as many screws as you can before trying to pull the raised bed boards away. This makes removing them easier and reduces the chance for the soil to be disturbed.

✳︎ Gently pull the loosened boards away, prying only when needed. We found having a person at each end of the board to peel the board away from the soil worked best.

✳︎ Remove any expensive hardware that is salvageable. We found most of the screws in our raised beds were still good and we saved money by not having to purchase new hardware.

✳︎ Level the new boards with any slope in the ground for watering without pooling. Also level the beds from one to another for esthetics and for ease of adding any watering system that goes from bed to bed.

✳︎ Once new boards are in place add more soil if needed to fill the beds more fully.

Map out your area with string or cut into the grass or dirt with a shovel to show where your beds will be. Also note any slope to the area.

Remove any grass or weeds that are growing in the new garden plot area.

Place a layer of cardboard or newspaper on the bottom of the garden bed area. It will eventually rot away but will deter any grass from growing up into the beds too.

Measure the length and width of your beds, twice, then cut boards to fit. We found, that it is best to have the boards at the end go all the way across and cover the cut ends of the long boards.

But you can also make the long side boards go all the way to the end and then place a smaller end board between them.

Once you have your area prepped. Place your boards and check to see if they are level. If there is a slope be sure to build up or dig down until each of the boards are level.

Fill the new beds with a mix of compost, peat moss and vermiculite. The vermiculite will help to heat the soil and make air pockets in the soil. The peat moss will help to retain moisture and the compost will feed the plants. I also added a little top soil to ours for a good balance. You can use potting soil, if top soil isn’t available.

It’s easy to think about skimping on the soil when filling the beds because it can take a lot of soil to fill them. But the quality of the soil can really determine on how well the garden grows. The soil isn’t the area to skimp on.

There you have it, how to rebuild raised garden beds, even with garden plants growing. Although I would really recommend doing this job before you plant your garden, it can still be done while plants are growing in the boxes.

What tips do you have to share about building raised beds? I would love to have you share them in the comments below.

This is an older post I updated with better formatting and photos.

Click the button below to get gardening tips and

sent to you too!

Gardening Tips Sent to Your Ibox