The last few days we talked about how clutter can affect you and yesterday I gave you some tips to stop the inflow of clutter. Today we are removing kitchen clutter. But not just any kitchen clutter the clutter that ends up on the counters. Yes, those horizontal surfaces can be a clutter magnet can’t they? 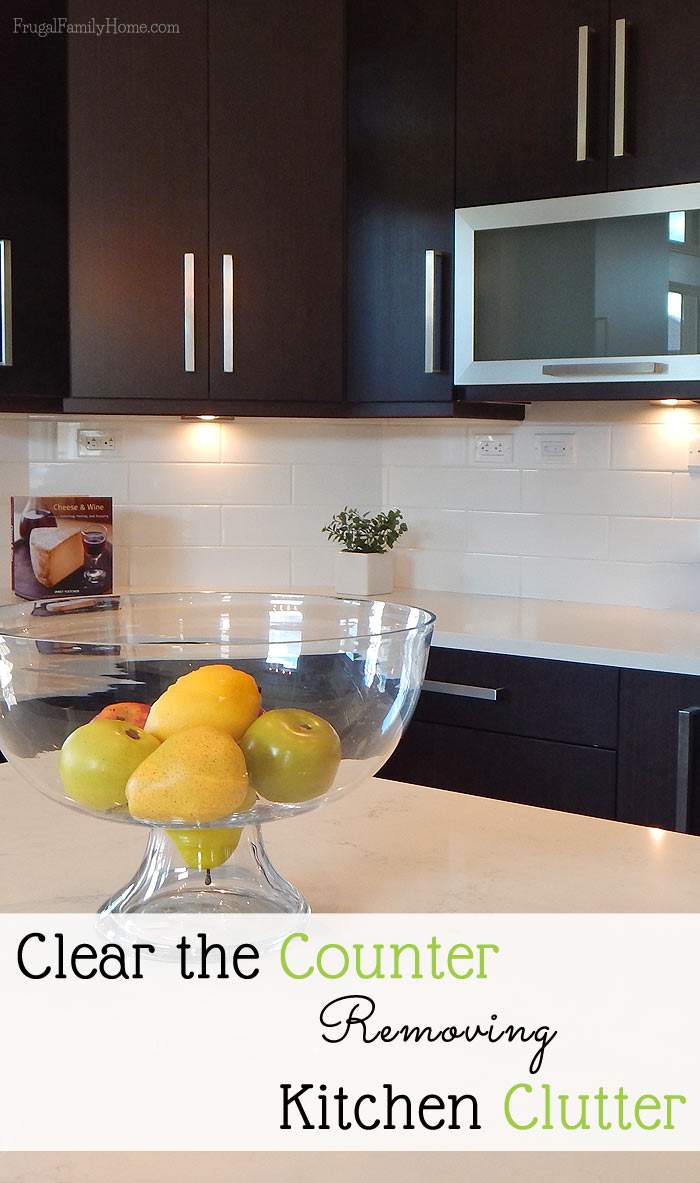 Counter clutter can be hard to clear off. I’m not asking you to have total clear counters. I don’t do that myself, but I do try to keep them free of anything that I don’t use on a weekly basis. That means if you have cute little sugar and flour bins sitting on the counter, but you haven’t baked in a year, it might be time to find them a new spot in the cupboard.

Why Tackle the Kitchen Counters First

The horizontal surfaces in your home and mine are a magnet for clutter to build up. You place one item on the counter and then you need a spot to place an important paper and so another item is placed there and pretty soon, the clutter just multiples. It almost like those first little items suck more onto them, like a magnet.

Another reason we want to be removing the kitchen clutter on the counters is all those items are really visible. All those items contribute to visual clutter. Visual clutter might not seem like a big deal but once you get it cleared off, you’re going to feel so much better. I didn’t think it made a big difference until I cleared my kitchen counter clutter. Now if I get too much stuff on the counter it drives me crazy.

The third reason we are removing the kitchen clutter is so we can cook. When the counters are clear there is more room to work in the kitchen. Which makes it so much easier to get meals prepared. Which leads to less eating out and saving money. Isn’t saving money a really good idea to help motivate you to clear off your kitchen counters?

Where to Put the Counter Items

I know right about now you’re probably thinking but where am I going to put all this stuff once I remove it from the counters?! I have a few ideas for you to find more space in your kitchen. Remember we are only clearing off things that don’t belong as well as items we don’t use at least weekly. It would be best to limit yourself to items you use daily. But if you are going from clutter counters I think weekly used items will be fine to start with. You can always pare down later.

Cut down on Plastic Storage Containers

This is one area I know I could find more room in the plastic container cupboard. Look through your plastic containers and remove all the extra ones. If you are like me you probably have a lot more containers than you would ever use in a week or a month. Cutting them down to the amount you will actually use, is sure to free up some room. I’m guilty of keeping way too many plastic containers.

Take your cookbooks off of the counter and put them in a bookcase in another area of the house. When we had our house up for sale I took all of my cookbooks off my counter and moved the ones I used often to the coat closet just a few steps away from the kitchen. When we decided not to sell our home the cookbooks never returned to the counter.

This is another idea I’ve read about, but I haven’t tried yet, but I just might. Remove the recipes you really like and use from the cookbooks. Place the pages into page protectors and make your own cookbook. Then you can get rid of the cookbooks you no longer need.

Create Storage Under the Sink

Add shelves under the sink to store items you use often but not daily. The shelves will make it easier to store more items and the items will be handy when you need them, but they will be off of the counters. This area is great for bulky items like coffee pots or mixers.

Cut Down on Items

Go through your drawers and cupboards, do you have multiples of an item? Do you really need more than one? I know I’m guilty of having way too many measuring spoons. I only use two sets, but I have three. So I could definitely pare those down.

Cut down on pots and pans. Just keep the number of pots and pans you need for your family. I know a few years ago when I purchased new pots and pans because the old ones were really getting worn out, I scaled mine back. Now I have just enough pots and pans to cook a holiday dinner and that’s all.

Baking pans is another area I’m guilty of having too many items. I have four 9 by 13-inch pans. One is a specialty pan for baking cakes with nice corners, but the rest are just glass pyrex dishes. Think about how many baking pans you really need and donate a few or give them to a friend who needs some. 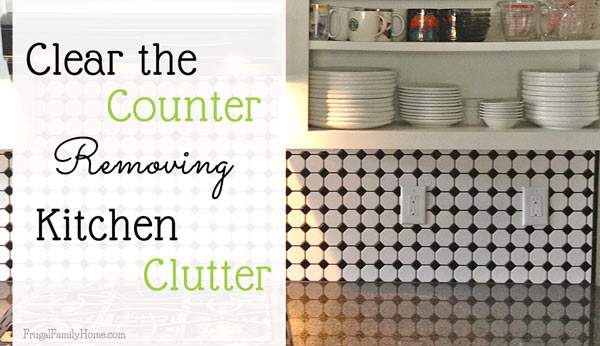 Switch to a Smaller Model

This might not be a tip that will be feasible for everyone but when you can replace a big bulky appliance with a smaller counterpart. We decided to get rid of our coffee maker that had been sitting on our counter plugged in for years. We don’t even drink coffee, it was only used on occasions when we had people over who liked drinking coffee. I donated our old coffee maker and switched to a french press to make coffee instead. The press fits nicely in the cupboard and I don’t have to have it sitting on the counter all the time.

A blender is another item you might be able to switch to a smaller unit easily. I know since I received this handy little stick blender (affiliate link) for a birthday present I haven’t even used the big blender at all. It also has a handy little food processor chopper and whip attachment too. But best of all it can be stored in a drawer out of the way.

Be Creative With Storage

If you have a super tiny kitchen, find open space to store things in other parts of the house. You could use open space under the bed to store canned goods. Or an extra linen shelf for items that are not used often. Or the coat closet shelf for your cookbooks like I do. Look for areas where you have a little extra storage and move the items you don’t use often there.

My last tip is just to sort and purge. If you find lots of items that don’t belong on the kitchen counters remove them. If it’s items you don’t need or love, recycle them or throw them away. If you have papers you need to tend to make a designated area for them so they won’t get lost in the shuffle. Hang a key holder for keys if you tend to just place them on the counter. But if the items you are sorting through are items you really don’t need just purge them.

If there are items you are not sure about, move them to a box and close it up. In a week or a month if you don’t remember what’s even in the box, then chances are you really don’t need it and it can go.

The assignment for today is to tackle the clutter on your kitchen counters. Purge items, find new homes for the ones you want to keep and clear out the duplicate items. Don’t forget to tackle your plastic containers too.

Come back after you’re done and leave me a comment about what you were able to clear out.

If you missed any of the articles in this series you can find the other frugal simple living posts by following this link.

Some of the links in this post are my referral links. When you use them I might make a little money at no extra charge to you. Thanks for your support in this way. See my disclosure policy for more information.