For the last two weeks I have made it a goal of mine to get some pickles canned. I usually just do up a jar or two of pickles as I harvest cucumbers  from the garden. But this year we had a cucumber failure. None of our plants survived. Since I wasn’t going out to my garden to pick cucumbers, making pickles slipped my mind until this month. 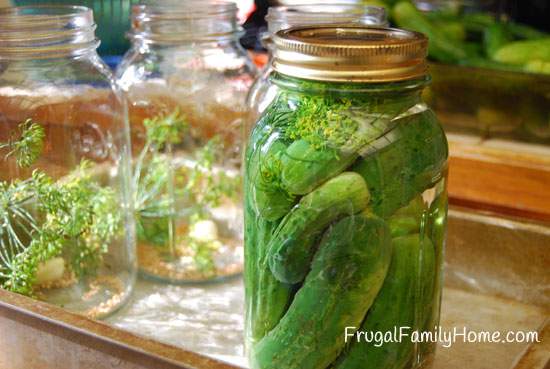 So this past week I made a trip to the local farm stand and picked up 25 pounds of pickling cucumbers. In case you don’t know, when making pickles it’s best to use very fresh cucumbers and so I went home with a plan to pickle all 25 pounds in one day.

My plan was going great, the kids were cooperating, I had my music on and the canning kettle was heating up on the stove. I picked out the biggest cucumbers first to wash, slice and chill for 3 hours. Those were to become my bread and butter pickles. 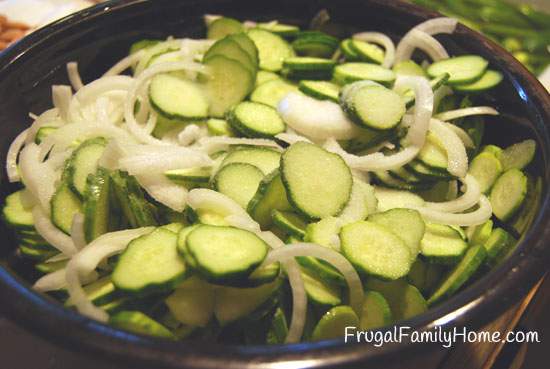 I should have known this was not going to be my day when half way through slicing the cucumbers on my mandolin slicer, I sliced my thumb instead of the cucumber. Ouch! that really hurt. I know I should really use the guard but  until that day I had never, in the last 7 years of owning that mandolin, ever cut myself on it. 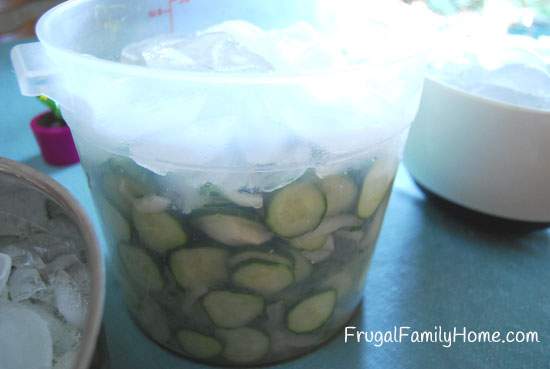 So after tending to my self-inflicted wound I went back to slicing the cucumbers, albeit a little slower and safer than before. Once I had all the cucumbers sliced for the bread and butter pickles, in their ice bath, chilling on the kitchen table, I went on to wash the other half of the cucumbers and start the brine for the dill pickles. 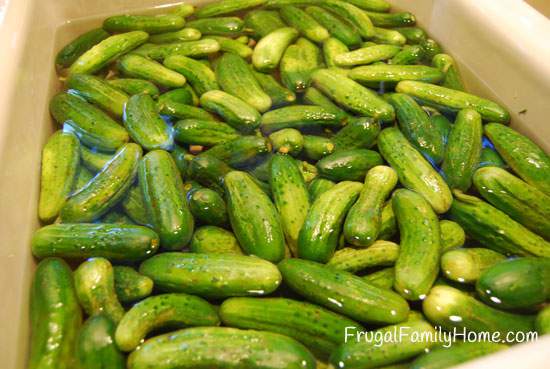 Now, dill pickles are usually a no brainer for me. Make the brine, stuff the jars and process. So I started the brine. I wanted to double the recipe so I looked at my conversion chart to convert the tablespoons to cups. I found the conversion and started to make the brine. Everything great right.?

Something seemed off as I was mixing up the brine. I had this nagging feeling that I was missing something. But I thought no, I have the salt, vinegar and water. It only takes 3 ingredients so I continued on ignoring that nagging feeling. I should have listened to that little voice and checked a little closer.

Well, it wasn’t until my second batch of dill pickles were in the canner, processing and I was just starting my third batch, which was going to be a smaller batch of sliced dill pickles, that I looked at my recipe again. I needed to just make a regular batch of brine instead of a double, so I took a look at the recipe and that’s when my mistake hit me and my stomach fell to my feet.

I had looked at the conversion for teaspoons to cups instead of tablespoons to cups. In the first two batches I had used 1/3 the salt I needed to according to the recipe.

To Determine if the Pickles Were Safe

Since I know that cucumbers are a low acid food, they need acid added to make them safe to can, I wasn’t sure if I had just ruined 12 quarts of pickles. I wasn’t sure if the reduction in salt would let unfriendly bacteria grow. Nothing like trying to poison your family with unsafe food. So after beating myself up over this rookie canning mistake. I went to search for help and advice. Where did I turn to, where else but the internet.

I couldn’t find  a recipe that was so low in salt so I searched out the phone number for my local Extension Office to see if they had a master canner on hand who could help me determine if my pickles would be safe, or if I was about to dump 12 jars of pickles down the drain.

The office was closed so I waited until morning, beating myself up now and again about how dumb of a mistake that had been. About how many times I had made pickles and why I didn’t realize right away something was off. Well, I had realized it but just chose not to listen.

I Learned My Lesson

So I learned my lesson, even when I am using a canning recipe I have made lots of times before I really need to be careful when reading it. And very careful when I am converting from tablespoons to cups. I really should have known since I know 4 tablespoons is 1/4 of a cup and I was needing 12 tablespoons per double batch.

I also learned I should have really listened to that nagging feeling in my gut that something was wrong and I could have corrected it right away. Hopefully I have learned my lesson. 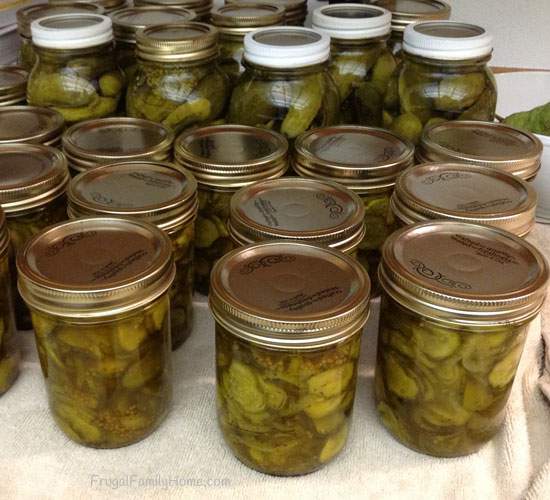 I ended up making 12 quarts of dill pickles, 3 pints of sliced dills and 18 pints of bread and butter pickles. We should be set for this year, as far as pickles go. Now I just hope the dill pickles are still good with the low amount of salt. Who knows, maybe they will be even better.

How about you, have you ever not listened to that nagging feeling when you know you should have? How did things turn out? Let me know in the comments, so I know I’m not alone.

By the Way, just in case you want to give making your own pickles a try, I have a recipe for refrigerator dills, no canning needed. If you need a good canning book I recommend starting with the Ball Blue Book Guide to Preserving or the Ball Complete Book of Home Preserving. (my affiliate links) Both are great books, be sure to check to see if your local library has a copy to check out.