Making pie crusts from scratch can be intimidating. I know when I first started making them I felt like I would never get them right. They would turn out tough or stick to the board when I was trying to roll them out. My great grandma used to make great pies. But since she was gone I needed to learn the secrets of a perfect pie crust on my own.

Then one day I was watching a local cooking show. The chefs were making pie crusts, so it was of real interest to me. As they were preparing the pie dough they mentioned not to be afraid of the water or flour. I thought it was odd, but then they explained.

Pie crust is really a simple cooking recipe. It only contains 4 ingredients, flour, water, salt, and fat. That’s it. In my pie crust below I used shortening, because we need to eat dairy free. But butter will work well too if you can eat it. Just swap out the shortening for the butter in the recipe.

Here’s a quick video to show each step, just in case your a visual learning like I am or keep scrolling on down to get to the written directions and the printable recipe.

Start by measuring the flour and salt into a bowl and mix. Then cut in the butter or shortening. I like to cut in the fat with my hands. Another technique I learned from that cooking show so long ago.

Cutting in the Fat

Now it’s time to add the water. I never measure but go by the look of the dough. I start by adding a small amount and stirring it in with a fork. If some dry areas remain I add a little more water until all the flour is moistened and the dough comes into a ball easily.

At this point if you are using butter you might want to pat the dough into a circle and wrap in plastic wrap and refrigerate for a while to chill the butter again. If working with shortening, I don’t bother with the chilling time. But go immediately to rolling the dough out.

Rolling Out the Dough

Rolling out the dough is when you don’t want to be afraid of the flour. Flour your board well and then place the dough on the floured surface. I also flour the top of the dough too. You don’t want to have the dough stick and have to start over, that will only result in tough pie crust. So be sure to flour well before you start to roll the dough.

If I have a large overhang of extra crust I will cut it off within an inch. With the overhanging pie crust, I just tuck it under to make the edge thicker. Then flute the edge with your fingers or a fork.

The pie crust is complete and ready to be filled or baked. If you want a top crust too, just double the recipe below and place the filling and top crust onto the pie plate before tucking and fluting the crust. 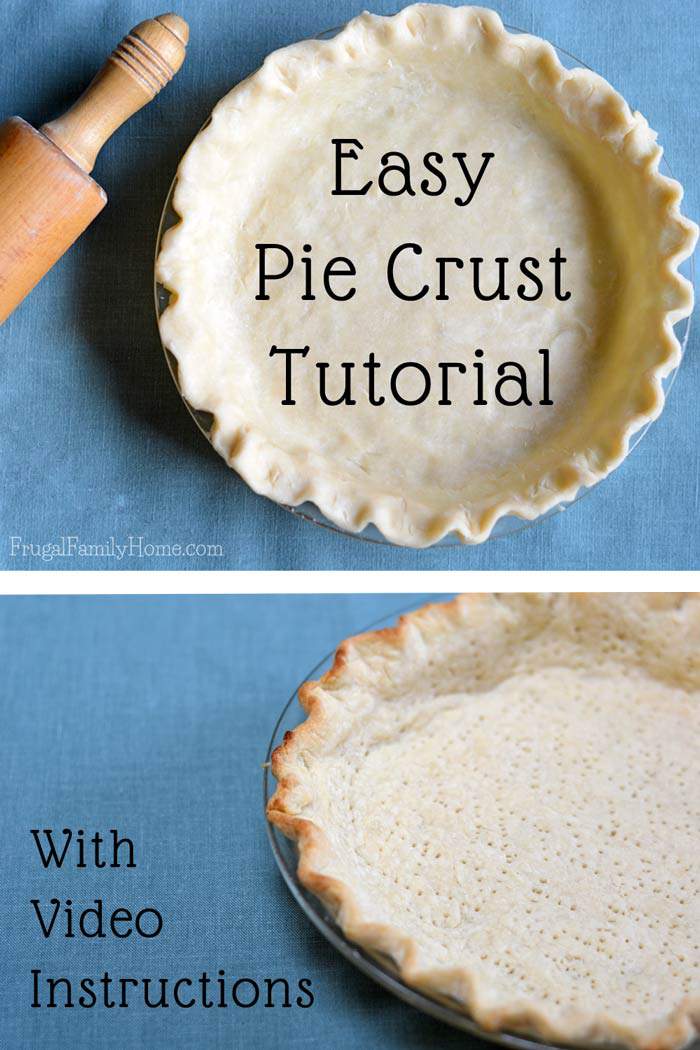 Shelly
Make your own pie crust at home. With this video tutorial you can be confident in making homemade pie crusts even if you've never made them before.
4.1 from 10 votes
Print Recipe SaveSaved!
Cook Time 10 mins
Total Time 10 mins
Course Dessert
Cuisine American
Servings 1 pie crust
Calories 95 kcal

Serving: 1servingCalories: 95kcal
Tried this recipe?Click here to tell us how it was!

What has been your experience with making pie crusts? Is it easy or a hard task for you? What tips could you add to the tips above to make the perfect pie crust? I would love to have you share them in the comments below.

See the rest of the articles in the Frugal Simple Living series by following this link.