A while back, I made some refrigerator dill pickles. They turned out to be just, ok. They were a little salty and although we ate them all, I wanted to find another recipe to use. So my search was on.

My search brought me to this recipe. I wanted to make sure I found a recipe that wasn’t too salty. But I also wanted a super easy recipe and that is what I found. I did change the recipe just slightly, because my husband likes garlic in his pickles.

The recipe is super easy, you don’t even have to turn on the stove. See I told you it was easy.

I didn’t want to chop the dill, like the original recipe called for. I guess I was just feeling lazy or maybe I wanted to make the recipe even easier. 🙂 I used a head of dill, that’s the flower that forms on the dill plant and a sprig of dill, the lacy looking leaf part, in each jar. Instead of using the chopped dill.

Since, I didn’t have a liter sized jar. I opted to use two quart jars instead. I placed one crushed garlic clove in each jar along with one head of dill and sprig of dill. Then piled in the cucumber slices.

I added 1 1/2 teaspoons of pickling salt on top of the cucumbers in each jar. Shaking it down a bit. The final step is to add 1/4 cup of vinegar to each jar. Placed a lid on each jar and gave it a good shake. You want to mix the salt with the vinegar.

Now it won’t seem like much juice at all in each jar, but after they sit a bit, more liquid will form as it is drawn out of the cucumbers. I placed my jars in the refrigerator and gave them a shake every 30-50 minutes over the next couple of hours.

After three hours we gave our pickles a try. I was really surprised at how quickly the flavor formed in the pickles. With other recipes, you usually need to wait 3-10 days for the flavor to build. But these were yummy after only a few hours!

By the end of the first day, we had eaten over half of the first jar. Did I mention how good these turned out? My search for the perfect refrigerator dill pickle recipe is over. We will be making these again and again. 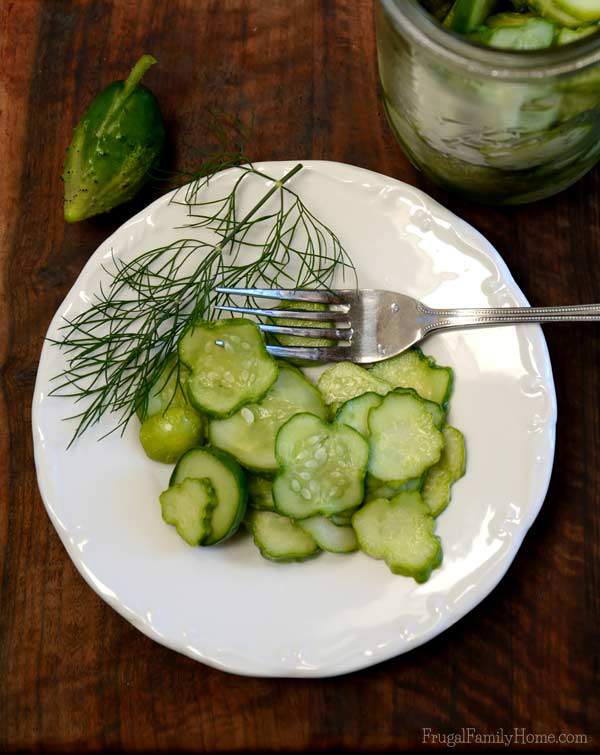 Shelly
Super easy to make garlic dill refrigerator pickles. You don’t even need to turn on the stove to make these and they are ready to eat in about 3 hours.
5 from 1 vote
Print Recipe SaveSaved!
Cook Time 15 mins
Total Time 15 mins
Course food preserving
Cuisine American
Servings 2 quarts pickles

If you haven’t made pickles before, you have to give this super easy recipe a try. I’m sure you won’t be disappointed. What’s your favorite kind of pickle? Dill, Sweet or Bread and Butter?