Earlier this week I shared that we now have raspberries in our garden. I love raspberries they are probably my favorite berry. I wanted to share this easy to make recipe for hand pies.

I shared on Facebook some great looking Easy Fried Pies from Liz at Hoosier Homemade. That got me thinking about making some hand pies.

We can’t eat the refrigerator biscuits because of the dairy products in them. I also am trying to lose a little weight so I didn’t want to fry the pies either. So I came up with this recipe as a solution.

If you don’t want to make your own pie crust, you can pick up the ready to use pie crust dough at the store. Don’t worry I won’t tell anyone.

Once the pie crust was chilling in the refrigerator, I set out to make my pie filling. If you don’t have fresh berries on hand, frozen will work well too. If you don’t feel like making your own pie filling, grab a can at the store and use it instead. I’m all for taking help from the store when you need to.

To each of the pie crust squares, I added a tablespoon or two of the raspberry pie filling. I didn’t really measure the filling but just put some in the middle of the square.

Then I folded the pie crust in half and sealed the edges together crimped them together with a fork. To make them have a nice decorative edge. See graphic above for the process.

Be sure to poke a little hole in the top of each of the pies. If you don’t your pies might leak like mine did. I did give each one a little vent hole while they were baking but they still exploded, lesson learned.

After all the hand pies were made I placed them on a cookie sheet and bake them in a 400-degree oven for 10 minutes or until golden brown. 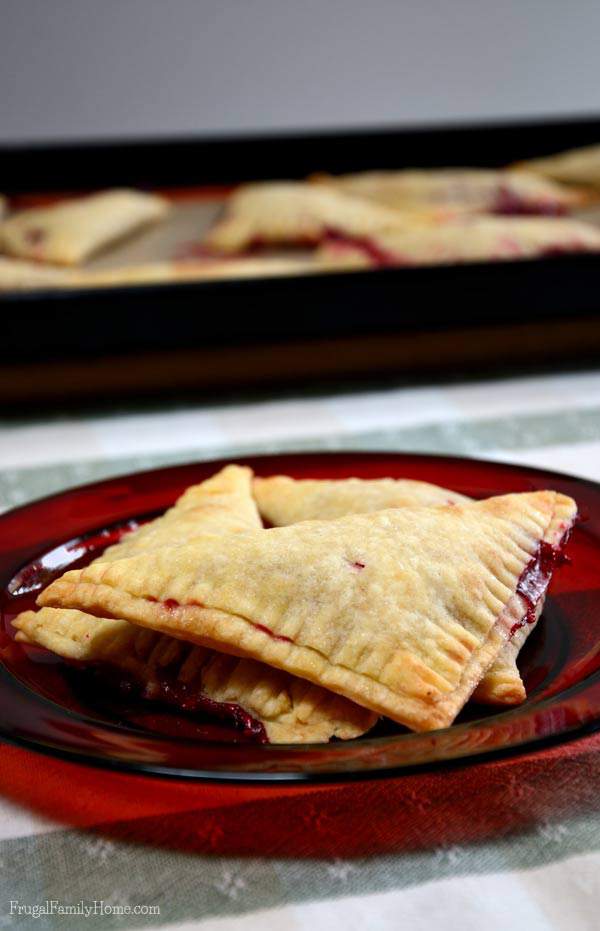